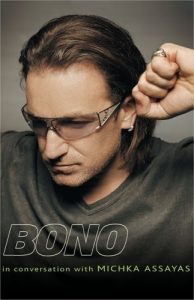 Bono said this in a recent interview:
“It’s a mind-blowing concept that the God who created the Universe might be looking for company, a real relationship with people, but the thing that keeps me on my knees is the difference between Grace and Karma…

You see, at the centre of all religions is the idea of Karma. You know, what you put out comes back to you; an eye for an eye, a tooth for a tooth, or in physics – in physical laws – every action is met by an equal or opposite one.  Its clear to me that Karma is at the very heart of the universe.  I’m absolutely sure of it.

And yet, along comes this idea called Grace to upend all that “As you reap, so will you sow” stuff.  Grace defies reason and logic. Love interrupts, if you like, the consequences of your actions, which in my case is very good news indeed, because I’ve done a lot of stupid stuff.

That’s between me and God. But I’d be in big trouble if Karma was going to finally be my judge. I’d be in deep shit. It doesn’t excuse my mistakes, but I’m holding out for Grace. I’m holding out that Jesus took my sins onto the Cross because I know who I am, and I hope I don’t have to depend on my own religiosity.

The point of the death of Christ is that Christ took on the sins of the world so that what we put out did not come back to us, and that our sinful nature does not reap the obvious death. That’s the point. It should keep us humbled….its not our own good works that get through the gates of heaven…”

All text taken from Chapter 11 of Bono on Bono: conversations with Michka Assayas, 2005 (Hodder).  Buy the book.

There is a poignant moment in that conversation with Bono. Michka pauses and says: “’The Son of God who takes away the sins of the world’’…  I wish I could believe in that.” Bono understands where she is coming from. He simply says to him that it all comes down to how we regard Jesus. He says: “When I look at the Cross of Christ. What I see up there  is all my s***, and everybody else’s. So I ask myself a question a lot of people have asked: Who is this man? And was He who He said He was? And there it is. And that’s the question. And no one can talk you into it or out of it.”

I think that’s  true. No one can talk you into, or out of, believing in Jesus. How can we discover this truth of God who interrupts?